⚠ EC 135 X-Plane 11 ⚠ New freeware project on X-Plane 11, a new EC 135 created by passionate members. We will try to make a most realistic version with our means and knowledge. At this time the developement are in progress, we work hard on animation, doors, joystick, knob, switch and other stuff. ⚠ No release date at this time, this is a devlog post, stay tune and stay safe! HSF Design And Rotorsim Team Up On EC 135 V5 Rotorsim announces that together with the French development team HSF Design, the EC 135 for X-Plane 11 is entering a new dimension.

We will try to make a most realistic version with our means and knowledge.

At this time the developement are in progress, we work hard on animation, doors, joystick, knob, switch and other stuff.

No release date at this time, this is a devlog post, stay tune and stay safe !

some screenshots to show you the progress of the works.

- Exterior model with all the doors animated :

- Overhead panel with all switch and cover guard animated :

- And the last screenshot, the panel with engine control panel animated :

We keep the progress of the animations in the cockpit, see you soon for a next update

So I just got back from a trip test-flying the EC-135 helicopter to fine-tune the performance of that helo in X-Plane for a customer. Here is the helo:

X-Plane is being evaluated as the sim to keep some EC-135 pilots current by flying the EC-135 in X-Plane in a MOTUS-motion platform made by Fidelity Flight Simulations. (This is explained at the certification section of this site) A familiarization ride was arranged for me to fly the helo in reality to be sure the sim can match it perfectly. One of the EC-135's was taken out of active duty and I was paired with the companie's chief test pilot for the flight. After several hours of system that makes the big, heavy, powerful, unstable craft manageable by mere humans... flying without it is a near-emergency situation in many helos. The EC-135 is NEVER flown without it except for training for the rare event in which it might fail... In these cases, it is one human against a 1000+hp, 4-bladed rotor, fenestron tail-rotor, rotor-flapping, rotor-leading-and-lagging, unstable, 6,250 lb hydraulically-boosted techno-beast). 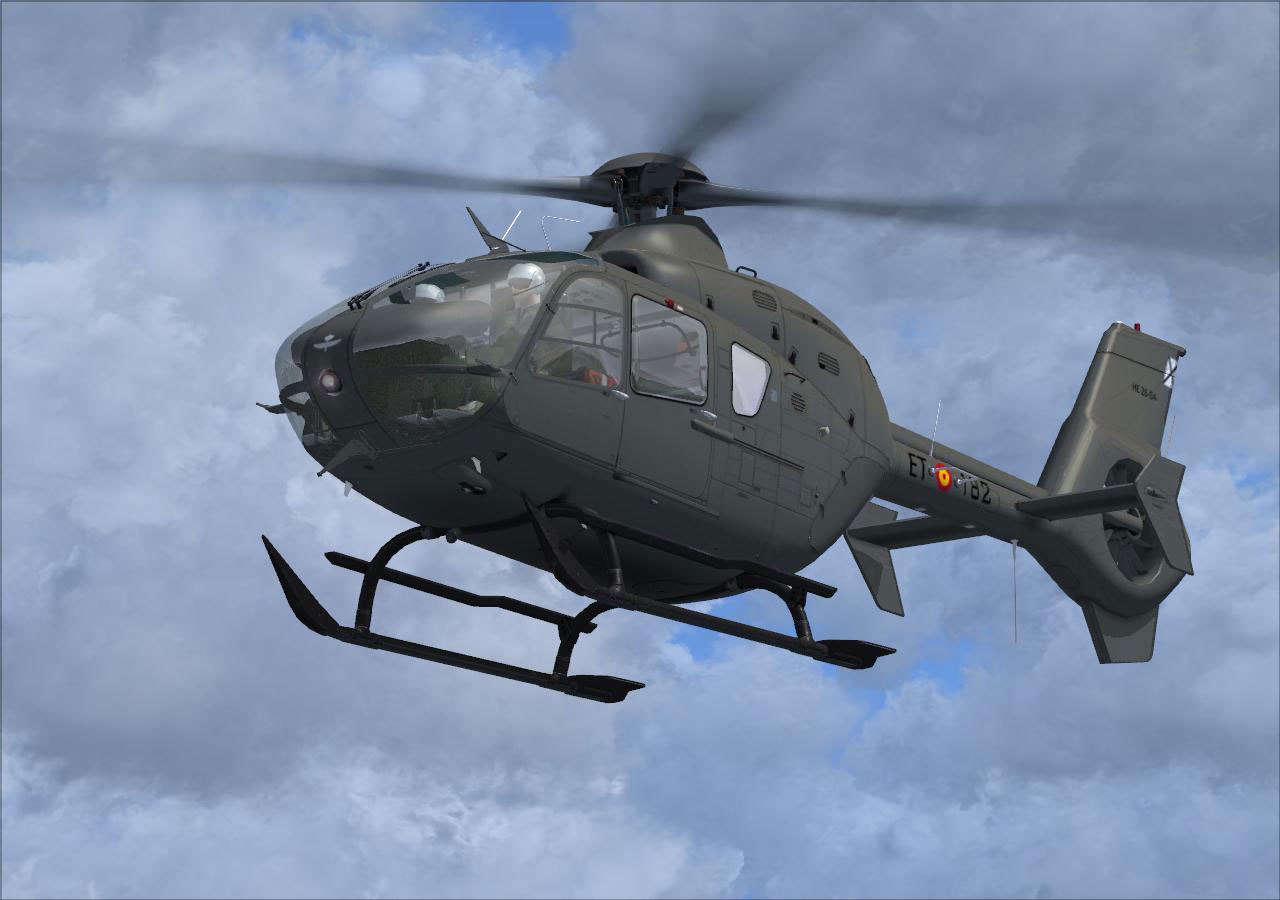 I flew some lazy 8's, climbing and descending turns, accelerations and decelerations, and other maneuvers. Most certainly different than any airplane (I have about 650 hours in them) but not unmanageable... there was constant oscillation from the rotor, scream of the twin jet engines driving it, 'whirring' of the 4-bladed rotor overhead, and slight oscillation of the hydrualically-boosted controls. All-in-all though, not too hard because

->1: the Stability Augmentation was on, letting the computer keep things manageable.

->2: we were going forwards at about 140 mph, letting the fins in the back keep us nice and straight, just like an airplane.

Had we been in hover, without that air blowing over the fins to keep us straight, or had we had a failure of the Stability Augmentation System, things would have been quite a bit tougher... especially on a windy, gusty, day... a day much like today.... raise your hand if you know where this is going.

After the forwards-flight lazy-8's and stuff, the pilot decided I might be able to try a hover after all... at a safe distance from the ground of course! I raised the nose to slow the ship to a stop at 3,000 feet and held her there... I got a bit sloppy, though, and let her begin to descend... this is where things get interesting: the craft settled in it's own propwash and suddenly started bucking like a crazed bronco on heroin and plummeted earthward! I got light in the seat as the lift of the rotors evaporated! The pilot quickly assumed command (dual controls) and flew us out of the downwards-moving column of air. This was an exercise in 'settling with power', whereby the craft enters it's own propwash and enters a rapid descent. While all the books on helo flight tell you about the rapid descent, they never mention it is more distressing than being locked inside of a barrel full of cocaine-frenzied monkeys because of the violent oscillations about all axis as the rotor sips in and out of it's own vortex! Needless to say, I will quickly be adding this feature into X-Plane! Look for 'SETTLING WITH POWER' as feature to be seen in a new update soon.

Once we escaped the downward-moving column of air generated by our own rotor, the pilot handed the command back to me and I resumed gathering our flight-test data to perfect the model in X-Plane, none the worse for wear other than being a little sweatier. Now I popped the big question to the pilot: What else can I try? The pilot had me head to a nearby small airport and fly the approach to the runway. he said to fly a gradually decelerating approach, and he would take the controls at the last moment and hover over the runway... only he never did. My approach was smooth, and I raised the nose to bring us to a stop at 0 knots and 10 feet right over the number, with no assistance from the pilot other than verbal coaxing. I held it right over the number for a few moments while the pilot tried to figure out how a student managed to do this on his first flight (of course I and all my customers know the answer: X-Plane! I have done this a hundred times on the sim!). The pilot took the controls and hovered us over to the side of the runway a few hundred feet, over the grass and about 100 feet from a row of trees marking the airport bounds. He handed control back to me and told me to hover in place. Now, over by these trees the wind was a MAJOR player in the game. The wind was spiraling and turbulating over the tree line, leaving us to dance in it's chaotic wake... I was all over the collective, cyclic, and anti-torque to hold the beast in place... but I still managed! We were constantly being pushed left, right, up, down, forwards, and backwards by the gusting wind, but a bit of firmness on the controls and an aggressive attitude towards mother nature had me holding the helo in a spot over the grass, 5 feet in the air, with only minor (but countless) small excursions and corrections. What helo sims do NOT show is that the grass is waving frantically away from you in every direction, and bits of grass and stuff are blowing around frantically right outside of the windshield from the rotor-wash. The pilot was apparently surprised to see anyone hover in their first flight in such rough conditions, so he decided to take things up a notch: 'I'm turning off the Stability Augmentation System'. Me versus the machine. BRING IT ON. The pilot hit a button, a loud BING warning sound filled the cockpit, and warnings began coming up on the cockpit display: 'Stability Augmentation System OFF!', they proclaimed in bright red text. Suddenly the beast lurched to the left in a gust of wind, no longer compensated by any computer! I worked the machine twice as hard as I had before, but STILL managed to hold our hover within 10 feet or so! Soon my hands were aching from gripping the cyclic with constant, small control inputs. The pilot decided to take it up another notch. 'OK, now do a pirouette, rotating about the vertical axis while you hold this location. Show me 360 degrees.' I began to tentatively rotate the mechanical behemoth, gradually easing the nose around, only partially in control of the rotation rate... SUDDENLY THE NOSE BEGAN TO SWING VIOLENTLY AROUND! I WAS LITERALLY PULLED FORWARD IN MY SEAT BELT BY THE CENTRIFUGAL FORCE OF THE SPINNING CRAFT! At the same time, we began to rapidly slide sideways out of our little windblown spot over the grass! A TAIL-ROTOR FAILURE?!?! 'I have the controls.' The pilot said, as if he was telling me that he had my cellphone in his pocket or something. Instantly the ship stopped it's wild rotation and was stabilized in hover again. What had happened is this: I had the tail of the craft to the gusty wind as I started the pirouette: But at some point the tail went to the side enough to suddenly UN-STALL and CATCH THE WIND! When that happened, the craft wa WHIPPED AROUND INTO THE WIND, with some sideways-pushing to boot. WOW. The pilot handed me the controls again and told me to land it. We were only 5 feet up, so I reacquired our hovering spot, held it as solid as possible, and gradually lowered it down. The touchdown was so smooth that the only way you could tell we were down was the lack of constant motion and oscillation of the last hour or so.. although we were sliding sideways a bit on touch-down... not the best practice! We got out of the craft, and the picture below was taken.